A utility requested IMCORP to commission two, 1.2 mile, 4000 kcmil 230kV circuits as part of a transmission resiliency upgrade project.  The client recognized the value of employing a field assessment comparable to the factory quality control test on the cable and accessories to confirm correct installation (continuous 50/60Hz overvoltage partial discharge (PD) test with 5pC sensitivity for less than one minute). The initial profile assessment confirmed the performance of all components except for a substandard joint over three quarters of a mile away (>5pC at 1.5U0 per IEEE 404, U0 = 133kV). The assessment was repeated for confirmation with identical results. Since there was no observable evidence of a defect on the outside of the joint, there was some doubt on the part of some stakeholders and an additional voltage test was requested.  After the joint failed under test, there was no longer any doubt from all the stakeholders.

A dissection confirmed the initial test results on the substandard joint. The installation of a shear bolt conductor connector was not properly completed, and a small burr created at one of the threaded holes remained. When the pre-molded joint was slid into place, this burr sliced through the interior surface of the joint, resulting in substandard PD activity, electrical/carbon treeing and subsequent failure. The cable ends at the joint were cleaned, sanded, and the repair joint was installed within 24 hours. The new 230kV cable systems are initially operating in service at the 115kV level and will be for several years until future upgrades are completed. Had this cable only been tested to the 115kV levels (such as during an online test), no issues would have been detected and it mostly likely would have survived in service until energization at the full 230kV level, years after the warranty expired. Ultimately, the IMCORP Factory Grade® test technology saved the client a future outage and enabled immediate root cause investigation and corrective actions for future installations. 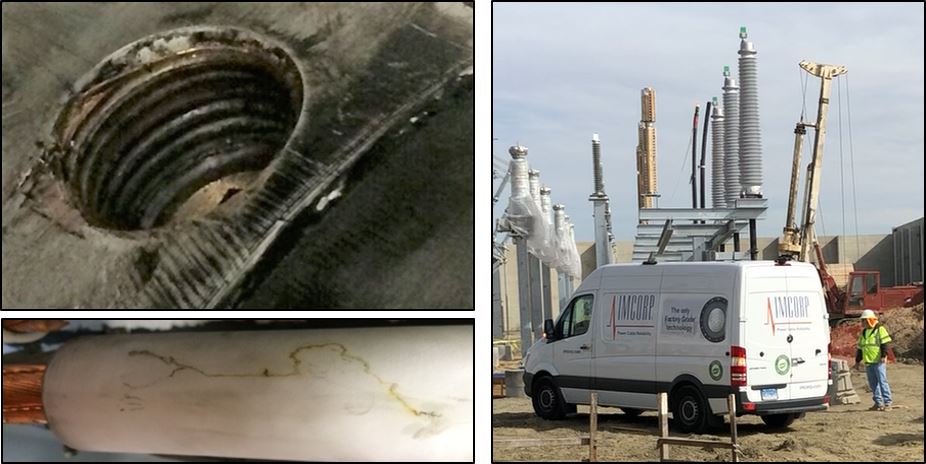