By: Ben Lanz and Bill Corrente 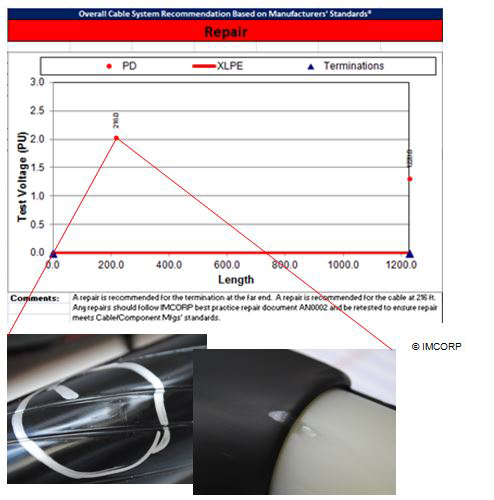 While commissioning new generation project in the multiple defects were identified within the cable system. One particular cable exhibited defects in the dozens of low magnitude partial discharge signals at two times the operating voltage.  The defects identified by the IMCORP Factory Grade® assessment had very small signal magnitudes, typically in the 7 to 8 pico-Coulombs (pC) range indicating the imperfections were likely small in physical size.  Since IMCORP’s Factory Grade® technology is the only field assessment with better than 5 pC sensitivity, the contractor began to question the validity of the results and rumors arose doubting the existence any defects.  As such IMCORP deployed its location matching technology to determine the position of the PD sites and a rigorous sample recovery process was followed in order to extract the cable segment for laboratory analysis.  No physical evidence of damage to the cable was observed during the extraction process. The cable segment was sent to IMCORP for full dissection and root cause analysis in the presence of the site owner, contractor and cable manufacturer.

During the laboratory analysis the cable was assessed again revealing the same electronic PD signatures that had been identified on site.  Upon removal of the jacket and concentric wires voids were observed on the outer semiconducting layer.  Further removal of this layer revealed multiple points of delamination on the insulation, evenly spaced longitudinally.  These issues were attributed to a problem in the cable manufacturing process.

Would you like to learn how to ensure cable manufacturing defects are can be caught before they cause outages? Contact us.